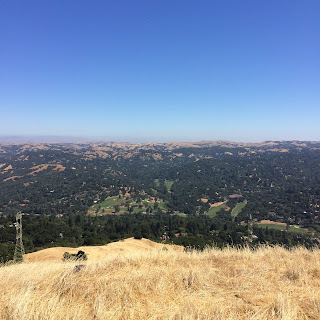 ORIGINAL DESCRIPTION FROM THE "HEAVY METAL HIKES" FACEBOOK GROUP: The other day, I was looking for some kind of decently long hike I could do without driving anywhere (because Jean Claude Van Ram is not in the best shape these days), and I noticed that there is a trail head right by Orinda BART. So I took the train out there, and walked over the hill back to Rockridge BART, and took the train home again. About 8.5 miles in three hours.

The original carless hike. I was looking for something to do that I didn't have to drive to, and I noticed from looking at maps that there is a trail that originates right by Orinda BART station, just on the other side of the hills. So all I had to do to construct this carless hike was get on BART at MacArthur, right by my apartment, and travel two stops east, through the tunnel beneath the hills. When I popped out in Orinda, it was a few degrees hotter, and a bit sunnier. Those of you who are familiar with the suburbs will not be surprised to hear that the most difficult part of the hike came at the beginning: trying to find my way out of the BART station complex in a way that would put me on the South side of Camino Pablo near the trailhead. After walking around for awhile, and following some false leads, I deemed this to be pretty impossible, and followed a path that led out to the dead end cul-de-sac of Orinda Way, which I followed out between the Shell and Chevron stations. At Camino Pablo, I RAN unprotected across the road, which was very busy at that time of day. It seemed like the cars were going at almost freeway speeds, and there's no crosswalk of any kind. But then the worst was behind me, and I was at the De La Veaga trailhead.

I was now on EBMUD Watershed protected land, and a sign informed me that I needed a permit hike in the area. Not even considering the idea of turning back after all the effort I had already put in, I decided to break the rules and continue. I'll get a permit if I ever do this again. HERE'S HOW YOU CAN GET AN EBMUD PERMIT 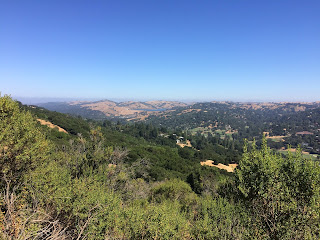 I hiked uphill on the De La Veaga Trail, enjoying pleasant views of the town of Orinda and Mount Diablo beyond. A side trail trail led along a fence to a point known as Hump 1551'. This was a typical Bay Area cowshit country hike, and the bovine beasts were plentiful, especially around the Siesta Valley area. Good thing they're peaceful animals, because they're HUGE, and if they had a mind to trample me, it would be short work. I am not a large human being. Climbed up the other side of Siesta Valley and popped out at Grizzly Peak Boulevard, back into familiar territory. Down the other side of the hills. The refreshment of the cool air on the Bay side, after the heat of Orinda made for easy going, and the view that opens up of Oakland and San Francisco is always a stunner. I can't imagine it ever getting old.  Came down Skyline Ridge, hit Claremont Avenue, and then took College to Rockridge, past the yuppies and the strollers, re-entering the BART system there. Carless hike successful! 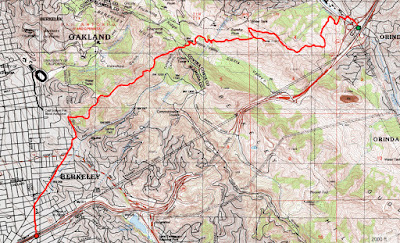 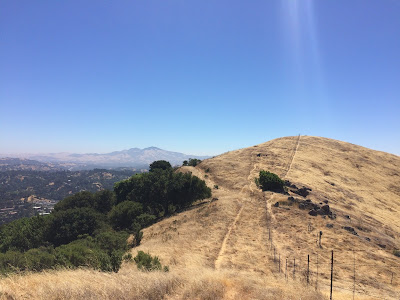 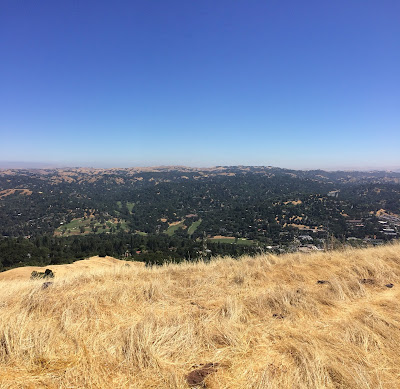 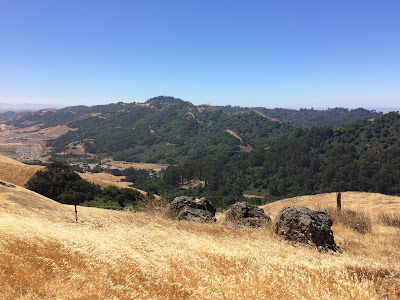