So, as this is the first post of the "Constant Ascension" hiking and climbing journal, we're gonna just jump straight into the deep end with all the themes that will continue to be seen in the future, as well as many that will be seen from the past, once I post all the "heavy metal hikes" from the archives. Hiking, trails, mountain climbing (not the jock kind) and victory beers...

My band Owl was up in Dunsmuir, hanging out at our bass player's house, practicing for the next gig. I had sworn I would not return to Dunsmuir without going up into Castle Crags, but with our time extremely limited, there was only a small window for a hike of some kind on Monday morning, before continued band rehearsals and the frantic drive back to Oakland. I didn't want to rush the Castle Crags... I figured Black Butte might be an easy up and down accomplishment, so I wouldn't leave the Shasta area that day "empty handed."

Above, I used a stock image at the top to illustrate Black Butte's position next the interstate. This is the view that most people have probably seen of it. I was not able to capture a photograph of it that day from a distant perspective. All the rest of the photography is my own.

Black Butte is "a cluster of overlapping dacite lava domes," visible to thousands of motorists on I-5 each day as they pass by from the North and South. If Shastina is the daughter of mighty Mount Shasta, then Black Butte is the illegitimate niece. Here's a much more eloquent description:

"... the nearly perfectly conical peak is visible from almost everywhere in the Mount Shasta area. When driving north on I-5 from Mount Shasta City, Black Butte rises directly over the interstate and it seems that the freeway is destined to run right into the peak’s rocky base." -Hike Mt. Shasta

I had probably passed by Black Butte twenty times or more since I began touring the West Coast as a rock musician in the early 2000s, but it was only within the past year or so that the idea crept into my mind to seek a trail to the top. So after a late night in Dunsmuir of Owl rehearsals and a vast tasting contest of Magic's special and potent home brews, it was decided that the Owl boys would make a quick summit of notorious Black Butte in the morning. We decided that five hours sleep would be enough, and set alarms for 5:30AM. As a backup plan, we set secondary alarms for 7:00AM, which turned out be the more palatable option.

Vowing to "just grab whatever on the way" to eat, we got some freshly made scones in downtown Mount Shasta City and continued to the trailhead, probably taking one of the more questionable dirt roads on the approach. Alex and I hit the trailhead at 8:25AM, leaving Axell slumbering in the van (he sleepily mumbled that he would catch up later, surprisingly he did). We started going up, and never looked back. OK, of course we looked back, because almost immediately, views of the surrounding majesty came into view.

The massive grandeur of Shasta to the East, Mount Eddy to the West, all the way to Mount McLoughlin in the North, Lassen visible in the South. Up and around the cone in semi circular motions, cascades of talus, the shallow hidden rocky canyons of the heights, weaving up the giant boulder pile.

At the top, there lay the foundation of an old fire watch tower. Annoyingly, at the summit, the place I really wanted to hang out, was the only place from the entire hike that had bugs. Indeed it was a plethora of flying, buzzing, biting insects, that almost instantly forced me down from the top to the peripheral heights, where we saw a survey marker and some kind of memorial (tombstone?). Did they haul the body all the way up there and bury it under the rocks? Maybe that's what was attracting the flies. Alex and I ran around at the top for awhile, and in better-late-than-never fashion, Axell showed up soon after.

Hanging out in high places is simply a delight for me, and it was amplified by the beautiful day and spectacular views of surrounding terrain, which,  looking south now, also included future goal of Castle Crags, the Sacramento River Canyon, and a landing pad for extraterrestrial visitors.

OK, how about one more picture of Mount Shasta, towering 7,835 feet higher than the point we were on? Then down, DOWN back on the rocky trail, for there were many hours of band rehearsals left to complete that day! Back at the trailhead, I noticed these (and these, and these) cryptic markings on the back of the sign. We found a much better dirt road to get out of there, and I tried to take a picture the mountain from the bottom, with almost complete failure.  Hit Mount Shasta City again on the way back, this time to devour some rather uh, "different" style burritos from Poncho and Lefkowitz (mine had black beans, white rice, zucchini AND yellow squash in it! Imagine what a challenge it was as a Bay Area dweller to accept this!)

Here's the trail map from the Mount Shasta Trail Association website. I didn't draw my own map, because we followed this trail exactly as it appears here. 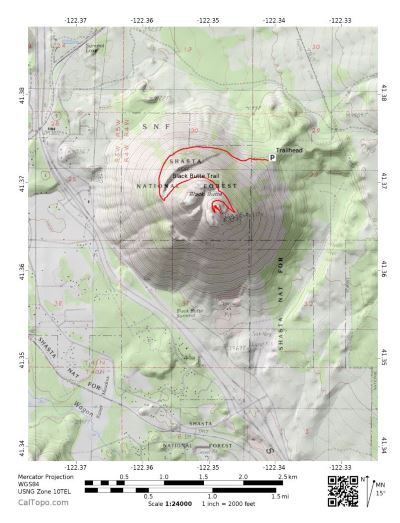