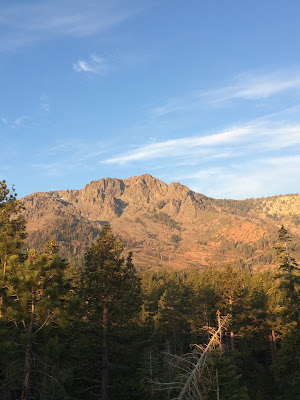 Mount Tallac is one of the most visible and well known mountains that rings the Lake Tahoe basin. Also, one of the most well climbed, as it sees something close to 10,000 visitors per year! I had some vague intentions on going up Tallac as my first Tahoe summit back in late June, during a muti-day camping / hiking road trip around Northern California. You can read here what happened instead that day. Even though I did not climb Tallac on that trip, I did catch an inspiring glimpse of it from across the lake, and was so captivated that I added it to my top ten "to climb" list. I took me until October to return and finally make a bid for Lake Tahoe's most popular peak. I know it's a "basic" summit, but I believe that beginning with the basics and and then moving on to the harder and more obscure mountains is the path that I should follow.

My brother Alex is one my favorite people to go hiking with, not only because I've known him for most of my life, and we get along pretty well, but I also know what to expect from him as far as his hiking appetite and endurance, and we seem to be pretty evenly matched. In addition, Alex has worked over the years doing trail maintenance for the Forest Service in the backcountries of Nevada, Montana, Idaho and New Mexico, so he knows his way around a damn trail! He even took me on my first ever backpacking trip when I went to visit him in Montana in the summer of 2016! His experience in the outdoors in vastly greater than mine, and it's nice to have him around should any questions or problems arise; I have a lot to learn from him still.

OK, at that point I started writing about what happened on Saturday afternoon as we were driving to Lake Tahoe, and what happened when we got to the campground. I realized you may not want to read that bullshit, because it has nothing to do with the hike at all! So I'm going to include that part at the very end as "bonus material."

We awoke at 6am, it was still dark in Fallen Leaf Campground, and about 31 degrees. By the time we had our site cleaned up, the sunlight was beginning poke out from behind the trees. When we started off on the Mount Tallac trail, it was 7:09AM, and there we already six cars in the parking lot before us. In less than ten minutes out, we were already overtaken by two trail runners, their masculine whoops and hollers had warned us of their approach. Mount Tallac quickly came into view on the right, illuminated, pink and snowless in the dawn's first rays. We gained elevation and witnessed the sun rising over Fallen Leaf Lake to the East. The smell of smoke lingered in the air, but atmosphere was clearer that I'd expected. The morning was crisp and wholly autumnal, the sight of turning yellow leafed aspens clinching the deal. We don't have too many trees that change colors down on the coast! We crossed the Desolation Wilderness boundary, and soon after, Floating Island Lake, which was a source of amusement to us, because we have a song called Floating Island with our band Owl. The trail climbed gently upward through forest lands, with some occasional steeper rocky parts.

Shortly, Cathedral Lake was attained, and we emerged from the forest into rocky, brushy hillsides. Elevation gain began in earnest now, and we could look out and see a generous haze of smoke filling the basin. There was an impressive formation of stone above Cathedrral Lake, which for this purpose I will call "Cathedral Turret." I thought, "damn, maybe we should climb that too." As we got up higher, and the trail began zigzagging through a talus field, I could look down and see that "Cathedral Turret" was actually just a nub on the large Southeastern shoulder of Tallac. Coming up through the scree fields, we passed a really beautiful western white pine. Sight of the summit had been lost at this point, and to look uphill revealed only a view of an increasingly hostile series of rocks.

Past the scree fields, we got to mountain's Southern shoulder, and began ascending through an area of sparse pine trees and light brush. The trail now finally brought us near the edge of the East face that we had been looking up at for most of the trip. We were playing cat and mouse with a few other groups of hikers by this point, all of us reaching the top a roughly the same time. We sat atop on the summit block by 10AM, less than three hours to the top, and one of the kindly fellow summiteers took our picture for us! We hung around the top for a little bit, taking in the (smoky) panoramas, and eating some gouda and sliced turkey tortillas for "breakfast." Some bonus scrambling was to be had on Tallac's Northwestern Flank, and we hopped and skipped over there, and had a look down into the cirque of Tallac Lake, and over at the magical white cliffs of Peak 9110'. 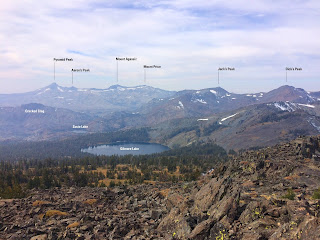 Cutting downhill, cross country from Tallac's Northwestern rocks, we hit a trail, and it looked the same as the one we had come up on. Then we met three backpacking young women, who were on their way up from Gilmore Lake. When I told them we were taking this way to get back to Fallen Leaf, they looked confused. Alex said "We're on the wrong trail dude." We did a light bushwhack back to the correct trail, and were then on our way down. One of the ascenders at the peak had warned us that he was barely ahead of two busloads of Chinese tourists who were on their way up the mountain. He wasn't joking! As we went down, they were coming!  In droves! Chinese grandmas with their trekking poles and sun visors! (Maybe we can meet them all at the casino in Stateline later) Damn, this is a popular peak!  I can only imagine what it's like on a Sunday in July instead of October! Back down to Cathedral Lake, I could see that the wind must have shifted, because Tahoe basin was getting more obscured by a veil of smoke. I felt bad for anyone who was coming up the mountain now, because their view of the lake would be even more tainted than ours.

Near Cathedral creek, Alex suggested we take an alternate trail down to Fallen Leaf Lake, which would add some mileage to the trip, but hopefully get us away from some of the massive crowds we were encountering. Not only did we get to see some other scenery, and an excellent view of FLL, we only saw one other human being on that stretch. The trail cut steeply down the hillside in a Southerly direction, and then cut almost 180 degrees back to the North when we got near the lake. We never quite got TO the lake, because the shore was lined with quaint summer cabins on private property, most looking lonely and quiet as the vacation season drew it's final breaths of the year. The trail ended at a paved road, which which we continued North on, through the cabins and breezy aspen groves, rustling in the afternoon light. A slight left turn through the bush got us from that paved road back to the trail head parking lot, and we were back at the van at 2:10 PM. 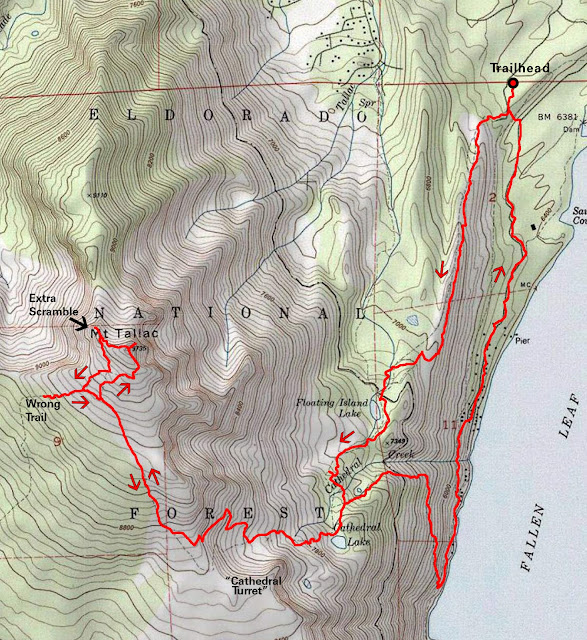 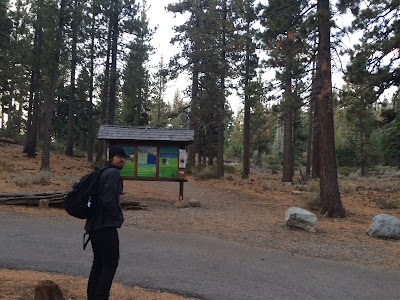 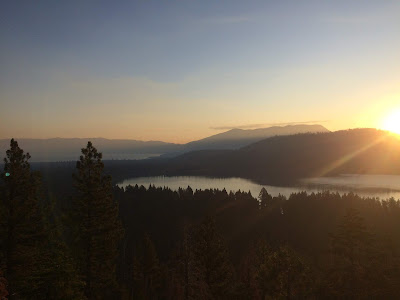 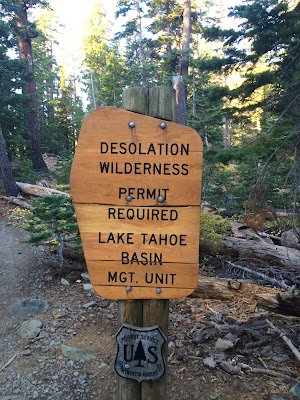 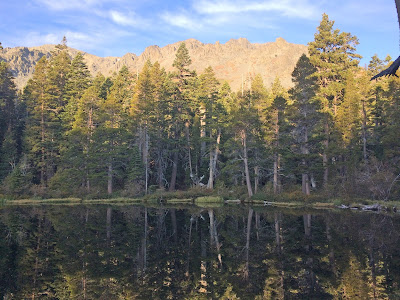 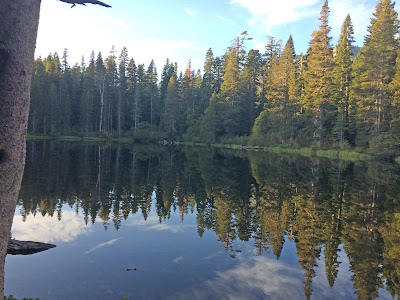 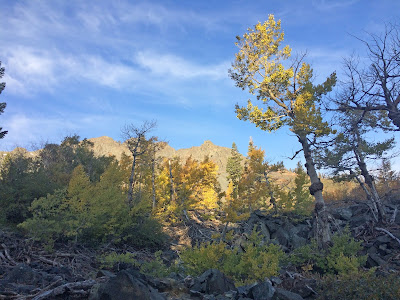 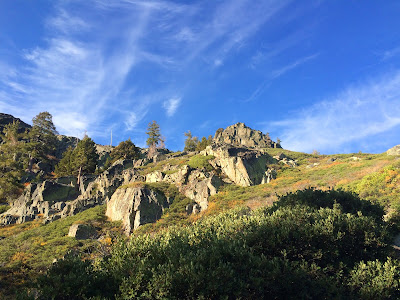 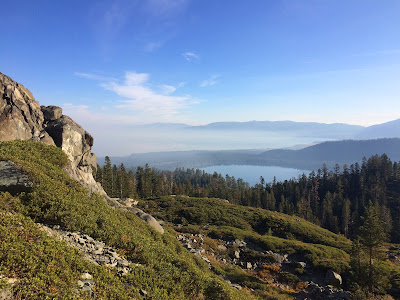 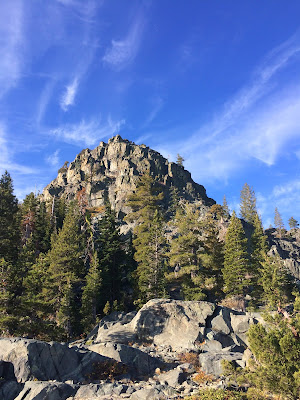 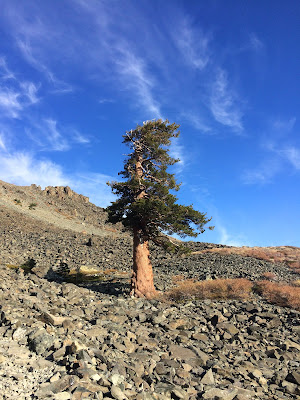 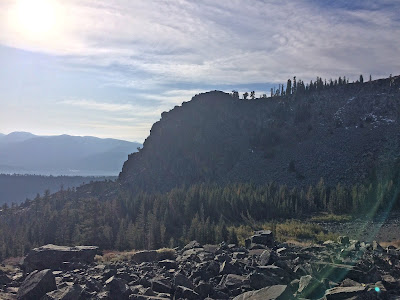 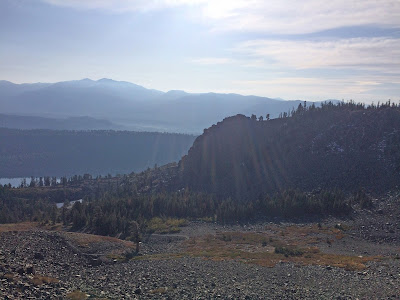 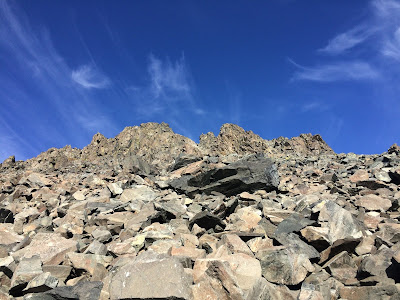 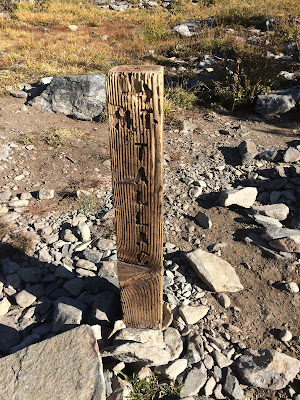 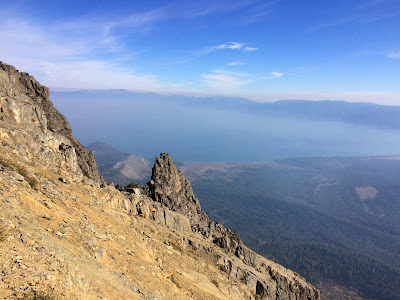 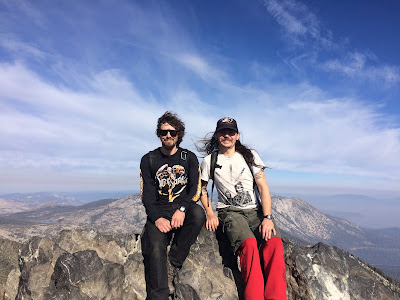 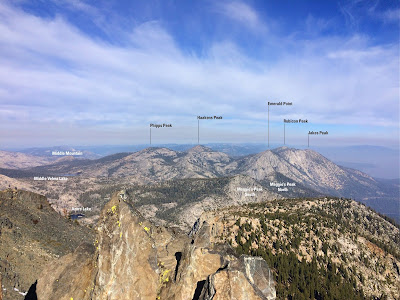 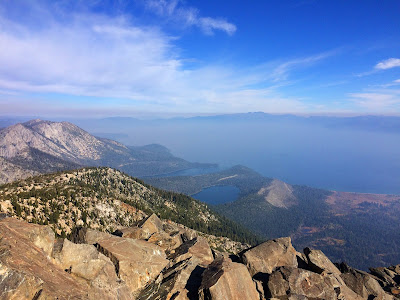 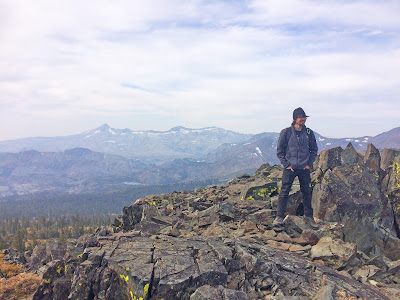 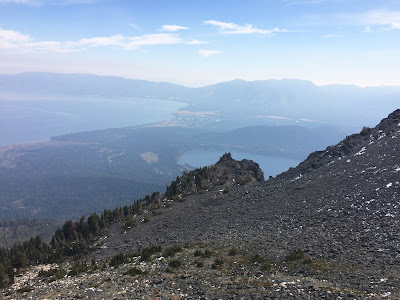 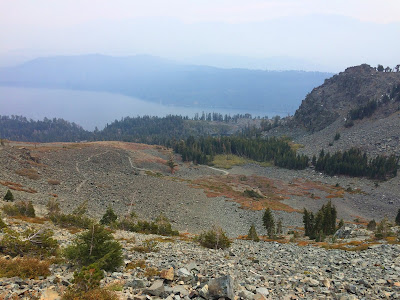 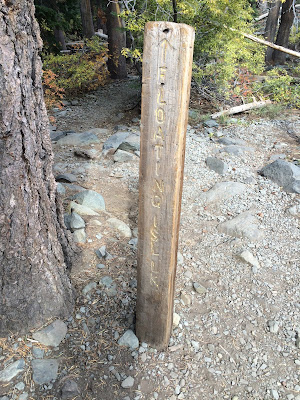 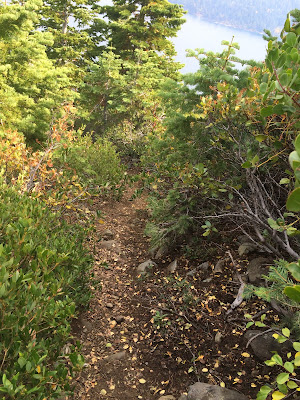 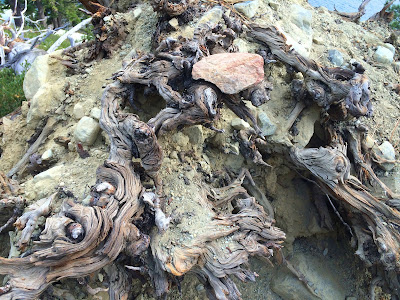 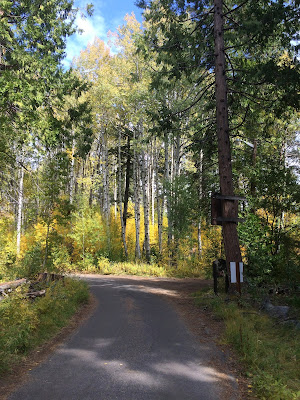 BONUS MATERIAL: WHAT HAPPENED SATURDAY ON THE WAY TO LAKE TAHOE
Right now, Alex is living back in Oakland and only has Sundays off work, and were were waiting for a time when we both had that day off so we could go for a mountain hike somewhere. Sunday, October 13th looked promising. Alex picked the region: Lake Tahoe, and I chimed in that I already had a mountain in mind to tackle. He chimed in that he would probably be free by mid-Saturday, so I planned accordingly. Damn, this might even turn into a camping trip! Whimsically, I looked up the closest public campground to the Tallac trailhead, Fallen Leaf, to see if there were any sites available. It turned out that October 13th was the last day of the season, and YES, there were three sites available to choose from! So we could cruise up to Tahoe the afternoon before, and camp out.

We left Oakland at 1:30PM on Saturday, October 12, and tried to cut through some delta backroads to avoid the omnipresent traffic on Interstate 80 (yes, even on Saturday, even in the middle of the day). It probably would have been faster to just sit on the damn freeway for awhile, because when we got to the town of Ryde, there was a car accident blocking both lanes of the highway, and we had to turn around and go all the way back to the previous bridge that crossed the Sacramento River, and come all the way back up along the other side of the river in order to continue. We also made a wrong turn at some point that had us seriously deep in the bayou backcountry. I half expected to see John Fogerty come around the next bend on a log raft. Eventually, we got to interstate 5, where a new, unexpected traffic jam had formed by the time we got there. So much for cutting around the traffic!

We crawled into Sacramento, through it, and out to Folsom where we stopped at a grocery store for supplies. A burrito from a shop in the same plaza was my first meal of the day. Disappointingly, but not surprisingly, the sky over the Central Valley had been hazy the whole time. No sight of the mountains. Even more disappointing, the sky remained hazy as we began twisting up into the hills. In fact, it was rather smoky! When we rounded the bend on Highway 50 into the Tahoe basin, I could see a thick cloud of smoke blanketing the area. There must be a forest fire somewhere. This could negatively affect the quality of tomorrow's hike! We got into town and learned from a local that the smoke was from a controlled burn near Carson Pass. (Well, good thing it wasn't a wildfire! And also, good thing we didn't decide to hike at Carson pass that day!)

The trip continued flawlessly as we went to find our campsite at Fallen Leaf, which we discovered to be occupied already by a large family, and by that late hour they were well settled in. Alex took the initiative confronting the occupiers, and things were figured out. Yes, they were in our campsite, and we would go find and occupy the campsite that the Parbhu family was SUPPOSED to be in, so they wouldn't have to move all of their stuff. It worked out rather well, because instead of getting our original tiny site in heart of the campground ghetto, we got a gigantic RV sized site on the edge of the camp with absolutely NO close neighbors. We joked that as soon as we set up camp the REAL Parbhu family would arrive and ask us what the fuck we were doing in their site! Alex and I cooked some dinner, drank a good amount of beers, and went stumbling around the lake under a full October moon. The sight of smoke in the air made things look quite mysterious, and the smell added a distinct autumnal vibe. We were crashed out in our tents before midnight.
at October 13, 2019