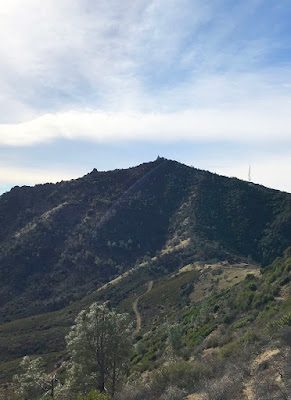 Since the year 2020 is intended to be the most hike filled one yet, why not start it off on the right foot… by going on a hike! Mount Diablo was on the agenda for today. (To read about my deep feelings on this particular peak, check out last year's report) I picked my brother Alex up up about 9:30am. Probably the earliest I've gotten up on New Years Day since well… ever? Usually, I'm STILL UP at 9:30am from the night before! We cruised through no traffic to the magic tunnel gateway of the eastern wastes, Contra Costa County, and hit the Safeway out by Clayton Road for snacks and supplies. My plan was to approach the mountain from a different angle than last year, and hit two new summits. To facilitate this, I parked us in an unmarked, free turnout on Marsh Creek Road, where it meets the gated, dirt grade Sharkey Road. This trailhead is not highly publicized, but luckily it is featured on the nice Mount Diablo Interpretive Foundation Map that I had purchased at the gift shop last time. There were three or four other cars in the turnout when we arrived at about 10:40 AM. And we were off. Sharkey road curved gently through the luxurious tall grass and rolling oak studded foothills. 2020 was going well already.

Bouncing between dirt roads and trail, we began to gain some elevation. Sharkey Road to Olympia Trail, Wise Road, back on Olympia, and the to the East Trail, which began lurching back and forth up the steep hillside. Everything on Diablo is well signed. Cool rock formations cropped out above us, and Mount Olympia, the first destination, loomed overhead. Views opened up from Northwest to Northeast. We left the trail for a bit to scramble over onto some nice rock formations and take a short break. Up to Mount Olympia, which is really just one of a series of bumps on a north-south oriented ridge that juts out from North Peak. But this is the only one that has a name. We found the summit sign post toppled over, and there were two completely full notebook summit registers in a receptacle on the post, which we didn't bother to dig through, to look for a place to squeeze our names in.

Onward and upward, as they say! From Mount Olympia, North Peak Trail contours along the west side of the ridge, eventually meeting North Peak Road, a 4WD route for the purpose of servicing the radio transmitters at the top. At this intersection, there is a small cinder block structure, and some leering face! Up the loose gravel of North Peak Road, and to the top, where a few people and many, MANY communications apparatus commanded the view. It would be the best we would have that day, as the higher South Summit was shrouded by fog by the time we got there. At this point, we had a good site of Mount Diablo proper, (south peak) looming in front of us, and in typical Alex fashion, he said "It doesn't look that far away." My only intention had been to scale Mount Olympia and the North Summit, the two I hadn't been to before, but Alex had only ever driven to the top of Diablo, and who was I to deny him this chance to hike it? So I threw away the rest of my day, and we carried on down the road to Prospector's Gap, and up the next summit continuing on North Peak Trail. Traffic had been moderately thick on the trails so far, and now there were a whole shitload of people coming to North Peak as we went down, trying not to slip on the gravel and embarrass ourselves in front of the moms and dads and kids and grandparents and dogs. Lunch break on a rock outcropping near Devil's Elbow. I ate half of my Safeway turkey sandwich. Vegan January is going to start TOMORROW!

It was around lunchy break time that a big cloud bank came in and engulfed the top of Mount Diablo above us. Our path was set, and we went up anyway of course. At the observation deck, we had a nice view of the inside of a cloud, and that was about it. Lots of people milling about, as they all had the holiday off work. We got away from most of them by heading east to Devil's Pulpit, an ominously named, (and today, quite ominous looking) rock outcropping nearby, which I had failed to visit last time. Some barely class 3 will get you to the top. Now it was into the unknown! I wanted to hit one more named sub-peak, Ransome Point, so we circled around to the north side and walked down what at first seemed to be an obvious use trail. It quickly degraded into something more like a tunnel through thick underbrush that we had to duckwalk and almost crawl through at some points, but it got us to Ransome Point, a thorn of stone that juts from Mount Diablo's north shoulder. At this point, we should have followed the crappy trail back to the mountaintop, and continued our journey on the real trails, but instead we decided to try our luck going cross country towards Prospector's Gap. I had seen some unmarked semi trails shooting up from that area on the ascent, and I figured one of them was probably a conduit Ransome Point and the Gap, and we would run into it really soon. No such luck! It was a nasty bushwhack section as we tried to contour along the hillside. There was plenty of loose gravel to slip on, and brush so thick that I was slithering on my belly to get past some of it. Eventually, after much stupid thrashing and stumbling, we did reach an unofficial track that soon joined the North Peak Trail and dumped us back at Prospector's Gap.

Standing at the crossroads, we had to choose our return route. We decided to take a longer and more arduous path to see how the waterfalls were doing. More new territory for the Alex man! Down Prospector's Gap Road, to Middle Trail, and then onto the waterfall loop. The falls were not going off as much as last time. I still want to climb up Wild Oat Canyon someday, and see the rest of the waterfalls, but the flow didn't merit that kind of exertion, plus it was getting late of day at that point. Cardinet Oaks road to Olympia Trail, which at this point, in order to avoid a chunk of private property, switchbacks steeply uphill for a good while, and I was getting pissed off. I didn't want to go uphill anymore! We should be going down now! Shut up, crybaby in my mind! SHUTUP!!! Headlamps went on at 5:35PM. Past the junction with the East Trail, we were just retracing old territory. Slogging back to the van. We made it. It was a much longer day than I had expected we were going to do! Alex demanded Scotch Ale, because he had gotten a vision of Scotland from the grassy hills and crisp winter air. So we went and got some back in Oakland! Beer free January is going to start TOMORROW! 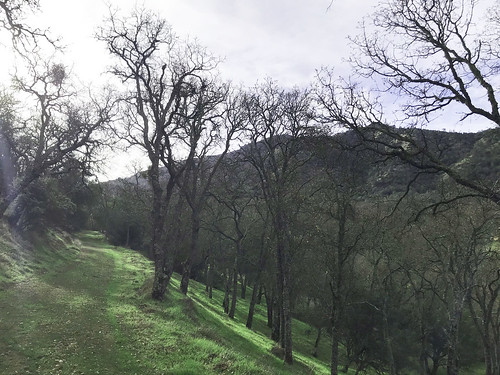