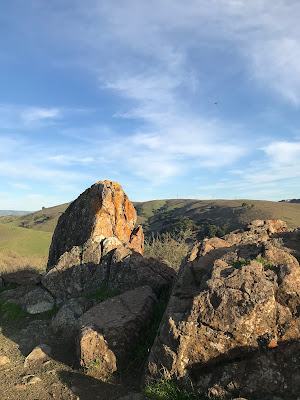 The Santa Teresa Hills are an east-west oriented ridge on the south side of San Jose. They were inhabited in succession by Native Americans, the Spanish, cattle ranchers, quicksilver miners, and later, suburban homeowners, golfers, and IBM. And on this day, they were temporarily inhabited by me.

After a day of painting a bedroom in San Jose as a favor, I was eager to go outside and get some fresh air. Amber and I ran for the hills, to a trailhead suggested by her intrepid cousin Allen (remember him from Big Sur?). This led us to the southwestern entrance of Santa Teresa Hills County Park, which Amber had actually grown up on the other side of. We started up a rocky (better than muddy!) trail that was signed "closed," but looked very open and very well used. We switchbacked uphill, got some cool views of the Santa Cruz Mountains, and came into an interior valley which is rather hidden from the outside world. Atop the ridge, there were cool rocks, old oaks, and scattered people out for a late afternoon hike, as we were. With not too much time on our hands, we made a tidy loop and went back to the car. Better a short hike than NO HIKE. 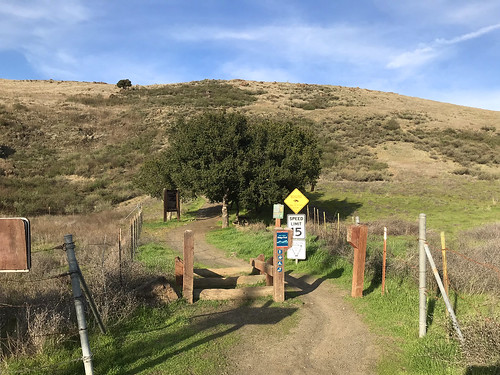